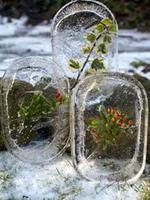 On a crisp day, with gloved fingers keeping the cold at bay and the sun warming noses and cheeks, there’s something really thrilling about venturing out in fresh snow. If you’re like me, you may even be tempted to create snow angels or start a snowball fight. But I wonder if the same is true on chillingly cold damp grey days, when all but the most stalwart adult would rather stay snuggled up indoors? For children their keen interest in just about everything outside seems to protect them from the cold and damp, much like the Ready Brek ad of my childhood. If you have children then at some point you too will probably have felt the need to explain to strangers their lack of coat when you’re wrapped up from the cold like Michelin man! Children, unlike adults, show little awareness of the cold and given something exciting to do, can play absorbed in low temperatures for hours. Adults however, myself included, are much less likely to respond enthusiastically when cold which makes me wonder if it is the adults rather than the children in nurseries and schools, who need the protective clothing! So if the right clothes and being absorbed in something are key, here are some ideas for fun things to do on those cold grey winter days:

Thanks to https://encrypted-tbn0.gstatic.com/images?q=tbn:ANd9GcRCq0woQBkfz1IayWVcd9N6L444kCLMJODaX8ExayC-Mz8KUq77AA for the image